With the new shot clock rules in the NCAA this season, as expected, scoring has increased dramatically. Everyone knows that. Here are the charts that show it:

Similar in distribution, but with a shift of about 10-12%. Given that the shot clock was reduced by 14%, this is what we’d expect.  There’s no real story here in regards to the 2015 numbers, but it’s certainly interesting to see how uniform the distribution is across the two years. But let’s not stop here. Let’s take a look at the 2016 numbers and splice them by conference. They should look somewhat similar, right? In theory, yes, but in practice, absolutely not.  Let’s start off by taking a look at the Big 12 (which, according to the computer rankings over at MasseyRatings [one of which is ours!] is the best conference in basketball), and below, we’ll put the SWAC, which is currently the second worst according to those same rankings.  I present to you, in super handy GIF format:

Woof.  That’s bad.  The overall shape is pretty similar, but the SWAC hangs out around 15-20 points lower than their Big 12 counterparts. It’s also interesting to see the pure volume of away games that a minor conference like the SWAC is forced to play in comparison to the Big 12, which is more than happy to have teams play only a game or two of out of conference away games.  So what do all 32 conferences look like? I’m glad you asked, more fun with GIFs:

I can just watch this for hours.  My favorite parts? Well for one, the outliers that required me to throw an arrow in (thanks Butler!) so that I could maintain a common X-axis. Secondly, it’s interesting to see the spread of another bad conference, the MEAC (the worst in Massey’s compiled ratings), where a clear subset of teams are separate from an otherwise miserable pack (congratulations to Hampton, Norfolk State, and SC State!). Also, as I mentioned above, it’s very interesting to see which conferences have to go on the road, and which get to spend their nights at home.  In case the gif was too fast for you above, here are all 32 conferences, in alphabetical order.  Enjoy! 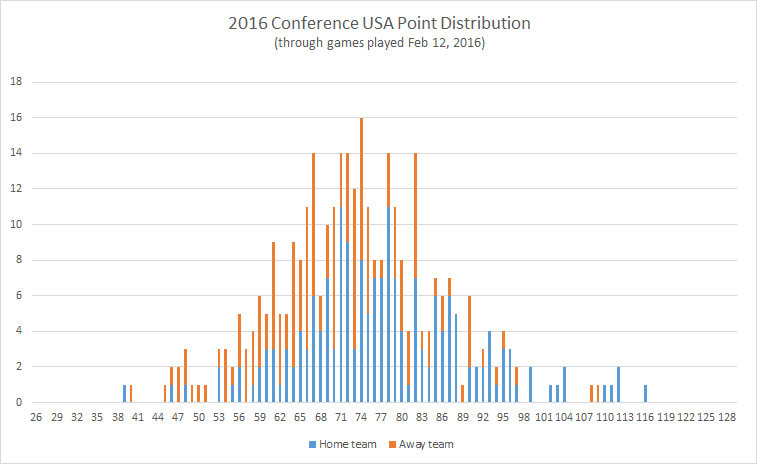 Tweets by AMSTS
Scroll back to top